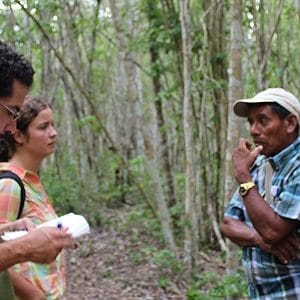 Projects > Conflict and Cooperation over REDD+ in Mexico, Nepal and Vietnam >

Conflict and Cooperation over REDD+ in Mexico, Nepal and Vietnam

The CoCooR project aims to strengthen the evidence of the impact of REDD+ on conflict and cooperation in developing countries through innovative research in Mexico, Nepal and Vietnam.

What is REDD+? REDD+ is an acronym for ‘Reducing Emissions from Deforestation and forest Degradation’ and is an international policy framework promoted to align forest governance in developing countries with climate change mitigation objectives, and to contribute towards poverty reduction and biodiversity conservation, through both national policies and concrete projects.

CoCooR (2014-2018) is an interdisciplinary cross-country project with a focus on analysis of conflicts and co-operation over REDD+ in Nepal, Mexico and Vietnam. The project started from the premise that REDD+ might aggravate the protracted conflicts characterizing forestry in the Global South or cause new ones in the absence of a conflict-sensitive approach. Yet, the changes in cross-scale governance brought about by REDD+ might also provide unprecedented opportunities for transforming existing conflicts and promoting cooperation. CoCooR has explored the impact of REDD+ in developing countries through national and local level case studies in Mexico, Nepal and Vietnam. These three countries, which are at advanced stages of REDD+, offer excellent opportunities for generating insights relevant to other countries. The project has drawn on ethnography, discourse analysis and participatory research and applied an environmental justice lens to the study of conflict and cooperation with the ultimate goal of contributing to conflict-sensitive REDD+ policy and practice.

The CoCooR project formally started in February 2014 and held its inception workshop in Norwich (May 2014). In that year, it also actively participated in the Second Norwich Think Tank on Environmental Justice, which led to the Second Norwich Declaration on Forest People’s Rights and REDD+ Safeguards (May 2014). The CoCooR team also surveyed REDD+ conflicts in the three countries and worldwide and national partners have undertaken investigation of local-level dynamics in six REDD+ demonstration sites (including joint fieldworks and exchange visits) and analysis of REDD+ safeguards processes at the national level. The partners also undertook photovoice projects with local communities that has provided a platform for them to tell their own stories in order to share their points of view. The photovoice project in each country has resulted in a large array of pictures and related life stories that have helped the participant communities to raise their concerns and needs regarding forest conservation and land-use during the exhibition events. Stakeholder engagement events and photovoice exhibitions have been held at the local, subnational and national levels, with participation from a wide range of relevant stakeholders in the three countries. The project team have also led and organised few exchange events with participation of other CCMCC projects (in 2014 and 2015).

The project team have identified divergent claims about REDD+ across the three studied countries at both policy and project levels, resulting in grievances around how much focus should the government put on carbon accounting and monitoring as a means to generate economic incentives for participant communities, and who should control such revenues. The team have also found that the necessary level of participation and informed consent that is required for REDD+ to be legitimate has been uneven, with more related conflict observed in Vietnam and less so in Mexico and Nepal. Overall, the project has unearthed diverse instances of conflict related to either historical struggles over land and forest rights (Vietnam) or unsettled debates about procedural fairness in forest and rural development policies that REDD+ has not yet contributed to resolve.

In order to share the team’s findings, the CoCooR project organised a 3-day international workshop on ‘REDD+ conflict and cooperation: understanding linkages and outcomes’ at UEA, 4-6 July 2017. This workshop brought together academic researchers, policy-makers and civil society practitioners to discuss how REDD+ national strategies and (pilot) programmes and projects have brought about, resolved or transformed conflict and cooperation in the management of landscapes and natural resources. During the workshop new (i.e. not yet published) theoretical and empirical studies focusing on conflict, conflict transformation or cooperation in the context of REDD+ were presented, including analytical approaches to better understand such dynamics and identify the most relevant research questions and required data, as well as detailed accounts from early implementers of how conflict or cooperation have been reinforced as a result of REDD+ early implementation. The workshop also brought first-hand experience of policy-makers and practitioners in the design and implementation of REDD+ strategies and projects, and their reflection.

The project team have also disseminated and discussed their key findings through several other activities. For example, the project held a workshop in Conflict Analysis in Norwich, UK, (24-25 October 2016), which brought together the CoCooR research team, with UEA-based conflict experts and a CCMCC gender expert. The workshop was key to elucidate the contents of each of the scientific articles being currently drafted. Second, project findings were shared in a number of international conferences, including: i) the FLARE Conference in Paris (November, 2015); ii) the LANDac Conference in Utrecht University (24-25 Nov 2016); and iii) Lund Earth System Governance Conference (9-11 Oct 2017); and iv) PECS-II Future Earth Conference, to be held in Mexico in November 2017. The research findings have also been presented and discussed in the stakeholder engagement events held in Nepal (August 2016) and Mexico (November 2016) and Vietnam (scheduled for November 2017).

The research findings have also been used to feed into the practical tools and approaches in conflict transformation developed by the project partner, RECOFTC. CoCooR has also developed conflict prediction checklist for REDD+ practitioners, producing recommendations on conflict-sensitive national safeguards processes for decision makers and provided relevant training to local communities, grassroots organisations, NGOs, government and project developers. RECOFTC has also published The Conflict and FPIC Training Manuals and a Policy Brief on Equity in Forests and REDD+, which complements CoCooR’s research in Vietnam. It has also published a report on sources of REDD+ conflicts. Two rounds of training on ‘Transforming Forest Conflicts in the Context of Climate Change Mitigation’ (in January 2016 and March 2017) and on ‘Free-Prior Informed Consent’ (in September 2016 and September 2017) have been organised in Bangkok. The project is also contributing to a joint CCMCC webinar on REDD+ conflict (to be held in November 2017).

The CoCooR project has also contributed to significant capacity development at national and local levels, as well as in-project level in the three countries. At national level, one of CoCooR’s aims was to ‘provide concrete tools to REDD+ practitioners (e.g. conflict prediction checklist) and decision-makers (recommendations for conflict-sensitive safeguards)’ with an ultimate aim to develop their capacities. In this regard, CoCooR research has contributed to the development of RECOFTC/Winrock’s tools and training programmes, while conflict predictors’ checklist and the conflict and FPIC training manuals developed by these organisations have helped the project team to refine their research and analysis. At local level, in-country team members have co-developed with local rural communities their own photovoice project, which has contributed to strengthen local capacities in terms of: a) using new technologies and visuals to denounce threats to livelihoods and changing environmental conditions; and b) communicating their daily subsistence practices, needs and struggles to the wider civil society, through their own pictures and the exhibition events. Finally, at project level, CoCooR members have benefited from RECOFTC’s offered courses, the insights on conflict and conflict transformation research provided by experts at UEA, and the ongoing mentorship in data analysis, article organisation and development provided by the project coordinators.

SELECTED OUTPUTS
– A video collection of REDD+ testimonials from the July 2017 workshop has been produced. The project is also preparing a 10-15 minute video on REDD+ conflict, synthesising its findings from the three case-study countries.